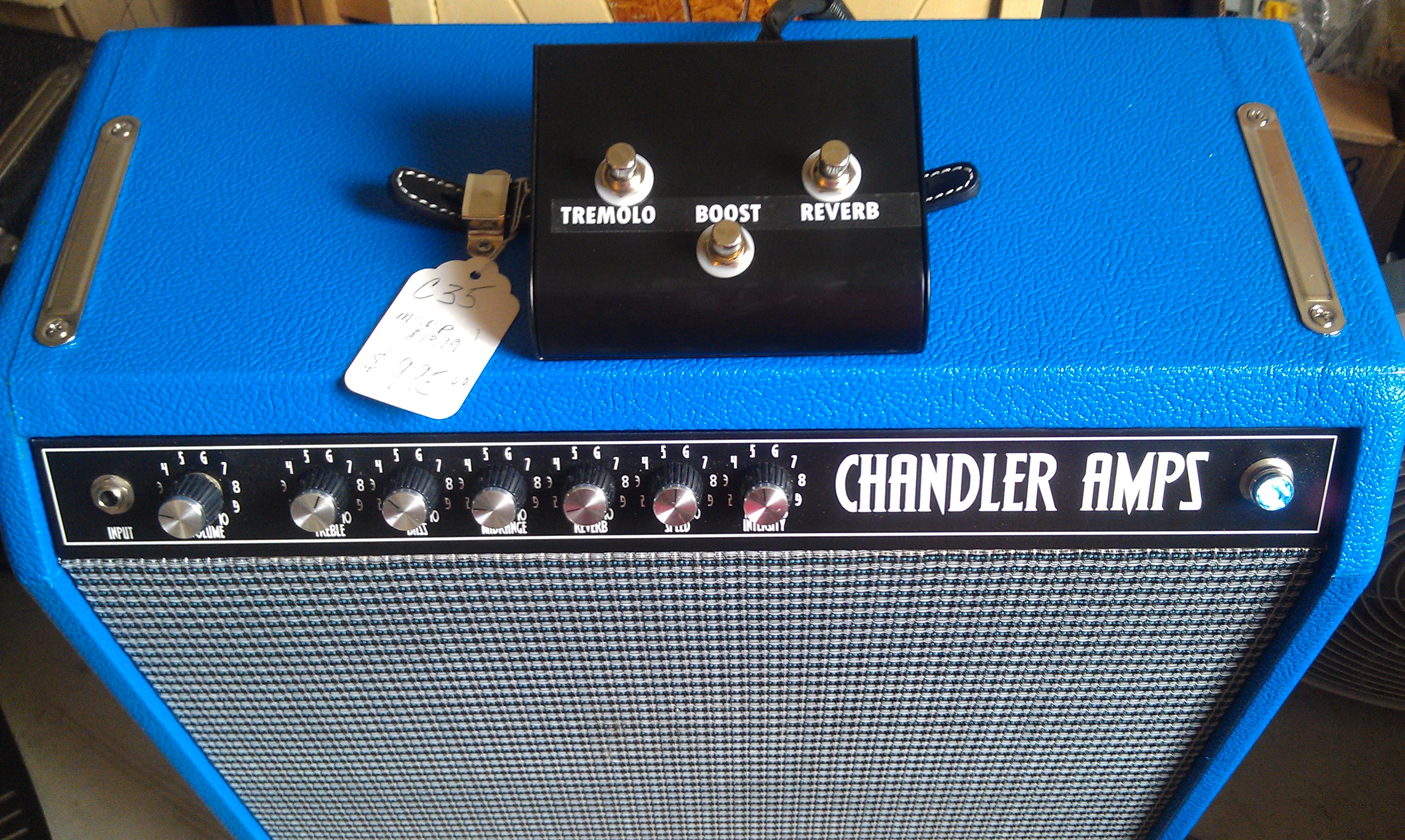 For Sale a Chandler Amps C35 demo model. The C35 (msrp $1299) is derived from a 1960's Blackface Princeton Reverb Circuit. Housed in a blue tolex 1x12 combo cabinet with a Weber 12F150 and beam blocker. We then beefed up the transformers and power supply that allows for the use of 6L6GC output tubes.The result was basically a louder, clearer 35 watt BFPR​​​ with bias vary tremolo and tube driven reverb.
Making the C35 a relatively small and light amp with enough headroom for most gigs.​​​​ With the Triple Foot-switch for reverb, tremolo and an adjustable gain/ raw boost you won't even need your pedalboard. The added Midrange control and pull boost on the volume allows for tweed type sounds when needed. There is also an impedance switch for the use of 6V6GT's and a dwell control for the reverb, both under the chassis. PM or email any questions....... SOLD - Thanks Dave B. 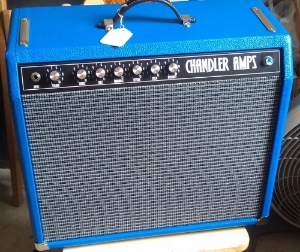 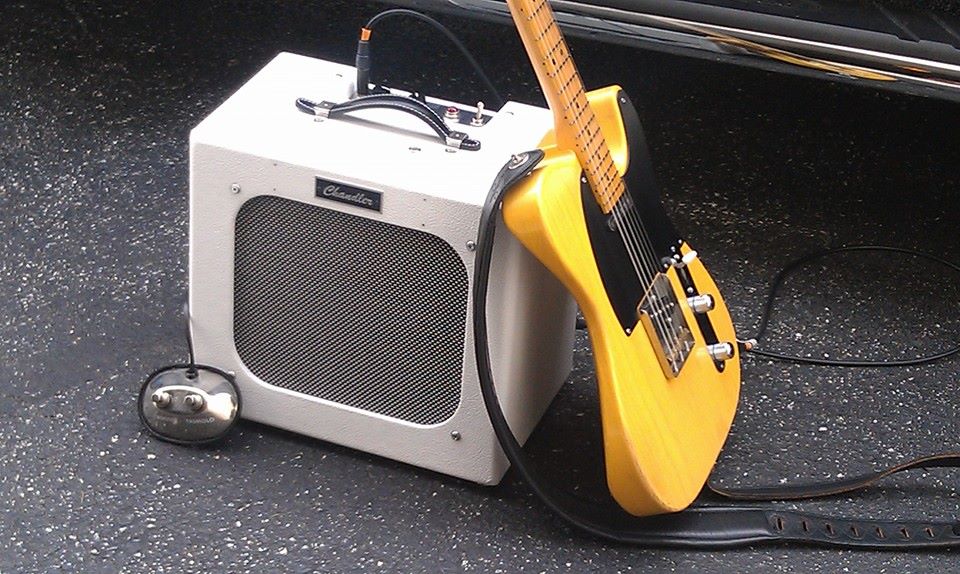 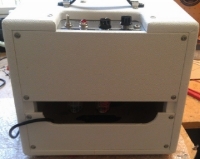 For Sale a Chandler Amps C10++ (msrp $899) combo amplifier, demo model. The C10+ started out as the 5 watt tweed champ circuit, chassis, white tolex cabinet (14.5 x 13 x 8.5") and 8" Weber 8A125 speaker. We beefed up the transformers and power supply to bring it up to about 10 watts running two 6L6GC's in parallel. Then we added a sweet sounding bias vary tremolo from the princeton and vibro champ. Top mounted controls are power/ standby, tremolo speed, volume with a Fat pull switch that adds some bass and gain. Tremolo intensity trim pot is set inside. Separate cathode resistors and an impedance switch allows you to pull one tube to go back down to 5 watts. Last but not least a dual foot-switch (pictured) is set up to control the Tremolo and a gain boost. So grab this amp, a cord and guitar and play any low volume gig or mic it up and wail away. This thing has great tone all the way through the volume control sweep. From 0 to about 2 o'clock it has varying shades of vintage clean tones. Crank it up it sounds like derek and the domino's or the faces old school class A single ended tone. WITH A FEW FREE TWEAKS WE CAN TURN THIS INTO A GREAT HARP AMP.... SOLD, THANKS! 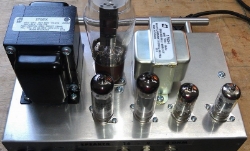 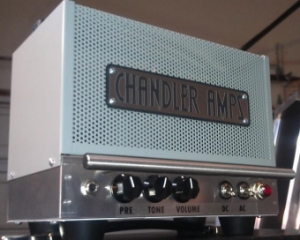 The Chandler Amps C15 (msrp $749) is based on many different "18 watt" EL84 tube circuits the we have built and restored over the years. Then we took the best sounding facets, including a tube rectifier and cathode bias to name a few and combined them all into this amp.
​This is a steel cage head version that has been used as a demo model.
​The controls are Gain, Tone and Volume with a single input. The tones go from beautifully clean and chimey all the way to overdriven and creamy. Depending on how the controls are dialed in. Plenty loud for a full band as long as you like a little break up to your tone or you mic it...SOLD, THANKS John B.
Demo and Prototype Models For Sale
Here are two clips of the C10++. One over driven the other clean with tremolo. 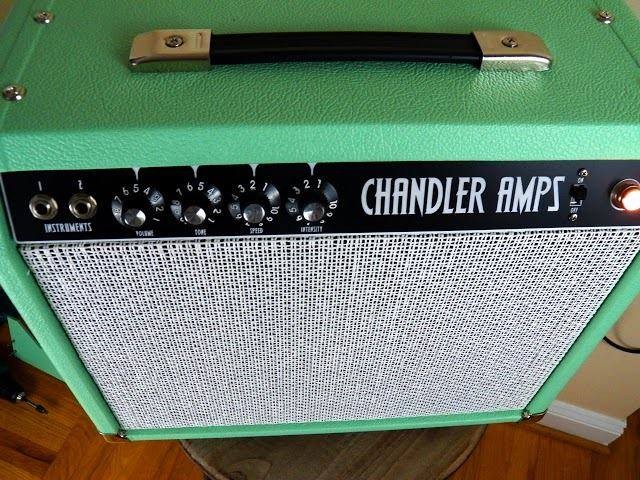 For Sale the ‪#‎chandleramps‬ C14. This amp was designed to be the smallest and lightest tube amp we could make while still having enough volume to gig with. It started with a vibrochamp sized seafoam green cabinet that we squeezed in a 10" jensen speaker (50WMOD) into. Then we took a brownface princeton circuit and beefed up the power supply and tweaked the design for more headroom. It has the lush bias vary tremolo and a boost footswitch, allowing the player to leave the pedalboard at home if your traveling light. Check out our www.facebook.com/chandleramps post for a sound clip. This amp was used as a demo. SOLD! Thanks Michael.